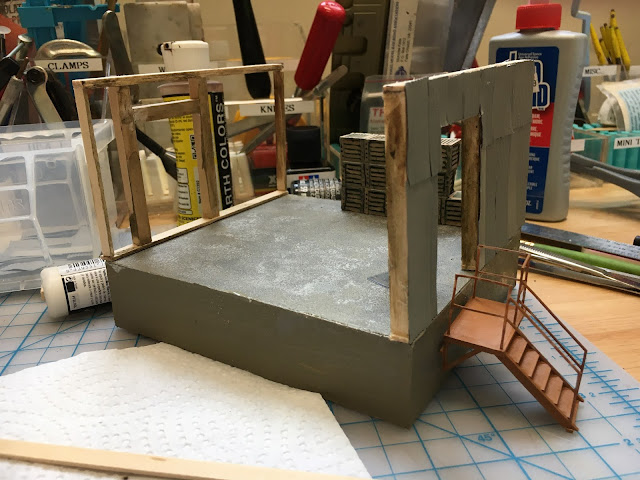 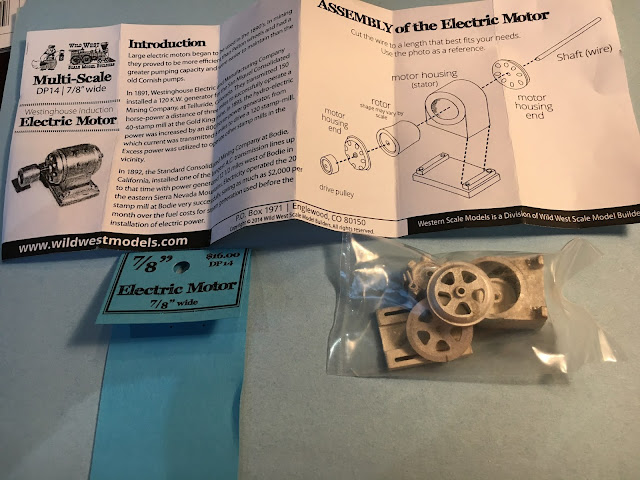 I will assemble and paint Wild West 7/8" Electric Motor DP14 $ 16.00 for the interior of the pump house. While I do not yet have castings for the water pump, we do know that they were electrically operated, hence the electric motor. Given the presumably large size of the pumps, I selected an electric motor that would be larger than the scale I am modeling this building in - O scale.


I also weathered the framing wood. The poured concrete platform is complete - though it will need a louvered vent beneath the doorway. I used spray adhesive to adhere the sandpaper to the five styrene surfaces constituting the base. I used three different paints to show concrete. The front and rear walls have a double top plate.
Two beefed up king studs on the rear wall support a beefed-up header to support a hoist I-beam. Framed side walls will follow. A photograph taken perhaps more than a half century after its construction shows very little rust on the corrugated sheets - my model set in 1944 will have almost zero rust. 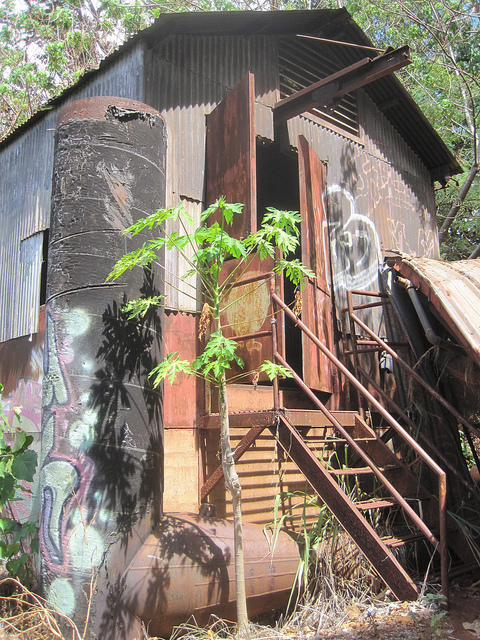 Another view of a corrugated metal pump house on Oahu Sugar Company. For modeling purposes, notice the metal exterior staircase. 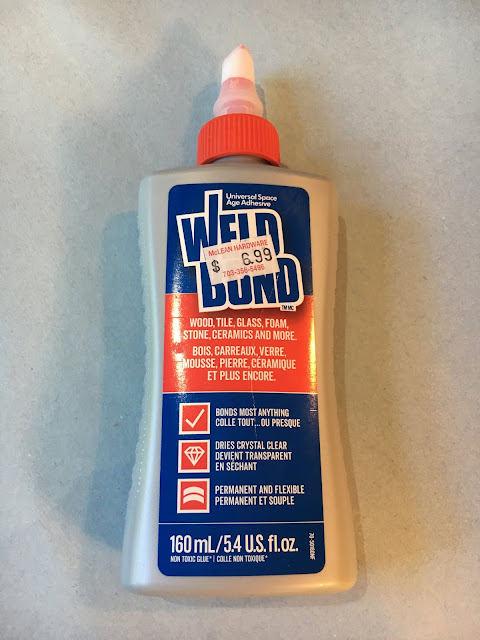 This is the recommended adhesive I used. Seems much thicker than regular Elmer's White Glue 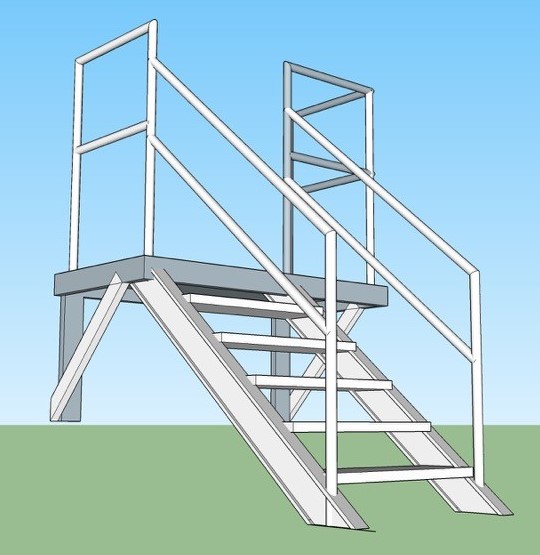 A Note About Working with Shapeways

Many modelers have decided to make 3D printing a sub-hobby (buying or even building a 3D printer). This can be quite expensive if one wants a 3D printer of equivalent quality to those owned by folks such as Shapeways. Hardware is only the beginning, one must acquire design software (at considerable cost or perhaps a free version) and then one most devote a good deal of time riding the learning curve of this software. Of course, one most also purchase the materials that form the 3D final product(s). One need not go that far to enjoy the benefits of 3D printing. First of all, while Shapeways has been identified as a European company, readers show know they ship their results out of Long Island City (which for those of you not from New York, is located in Queens, near the East River). Second, Shapeways has  stable of designers that can take your drawing and convert it into a CAD (Computer Aided Design)  drawing at fairly low cost (I think a fellow I used charged me $25/hour or so). If you don't have a scale drawing, the designers can still create a CAD drawing for you. And you get to pick which designer you want based on their experience as posted. In the case of these stairs, a friend provided the design work for free. Don't count on finding such friends. When I decided that scratch-building a small fleet of sugar can flat cars would be too much work for me, I found a scale drawing from Narrow Gauge and Shortline Gazette, reproduced same, and sent the pdf to the designer I picked at Shapeways. I was very pleased with his work. There was one kink in my sugar cane project. Shapeways created one set of fine brake levers but when I went to order more levers for follow-on cars, they responded that I needed to go back to my designer to re-work his CAD drawings - seems what I will call frets and fine parts can be tricky. Sheepishly, I must admit I never got around to this.

Don't forget, you will still need to paint any 3D detail you have made. And in many cases, you may need to assemble the item you had 3D printed as printing it in one piece could be cost-prohibitive.

So if you want another hobby (or sub-hobby as I called it earlier) go for it and buy a 3D printer -  the talented Gil Fuchs gave a clinic on this topic some time ago for the Potomac Division (MER/NMRA). But if you just want a few impossible to find parts for your layout, don't hesitate to work with Shapeways.

One final thought. don't just think of 3D printing for engine parts or rolling stock, it just might be that a passenger station you are modeling had distinctive trash receptacle, for instance, and that your station platforms just don't look right without them - then 3D printing can come to the rescue.
Color Photograph 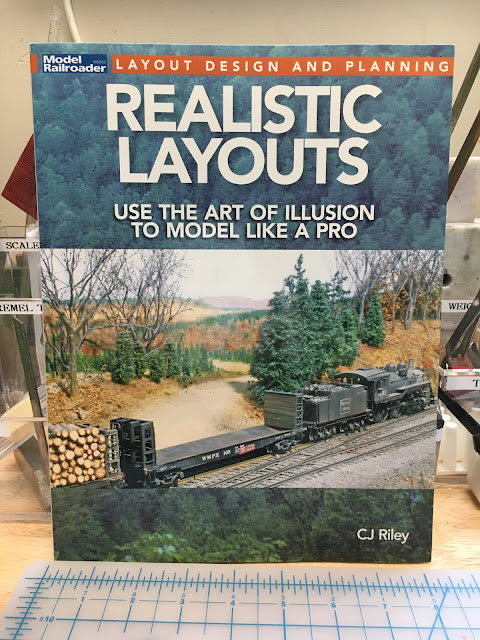 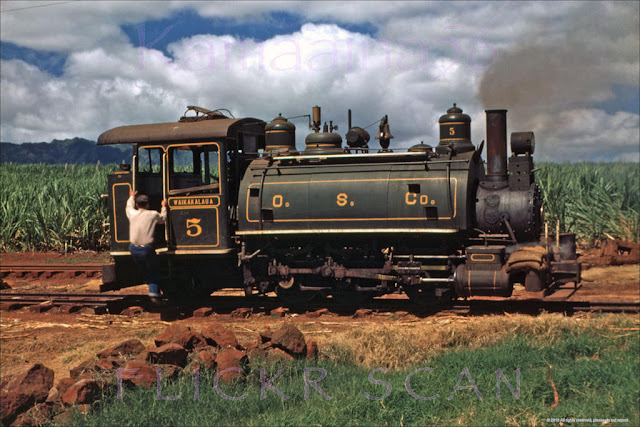 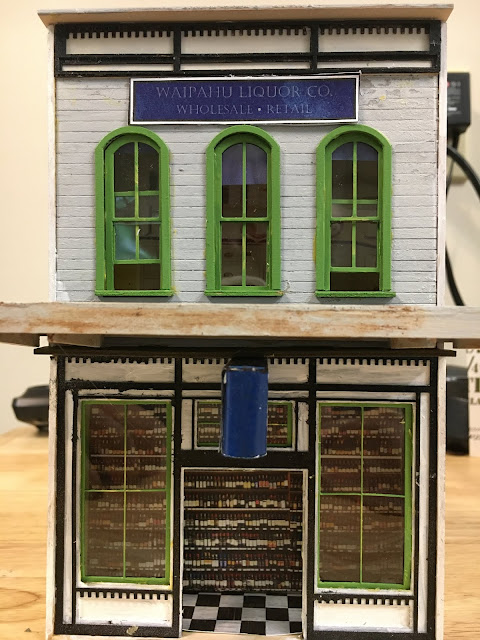